*Special thanks to WAR Angel from K27 for contributing her game guide to us!

There are several events in the Game of Thrones Winter is coming that will evaluate the players based on how well they can perform in doing different tasks and will give them rewards based on their ranks. One of the most challenging and important ones is – without a doubt – the Lord of Lords event. 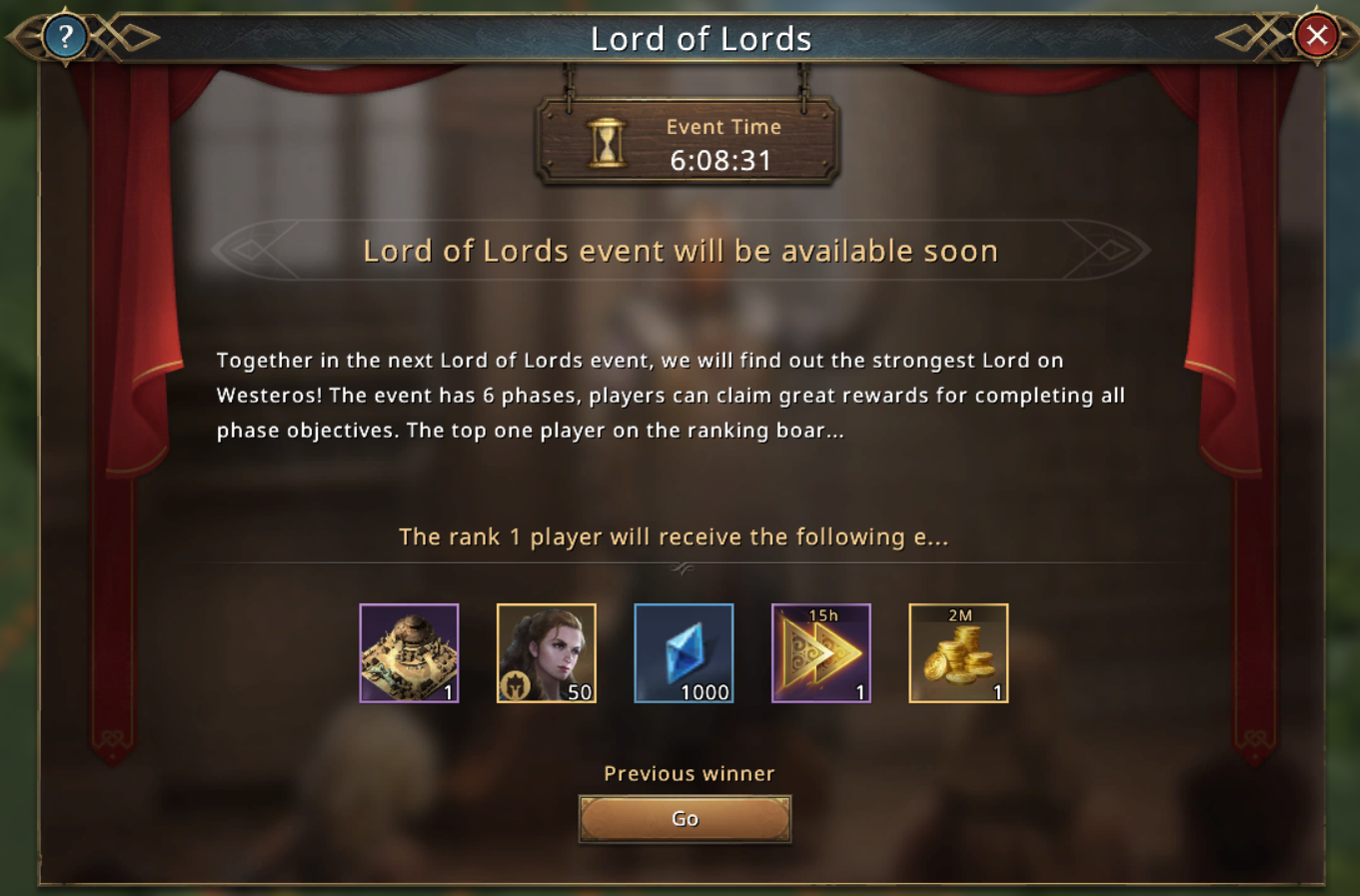 Lord of lords is a monthly event that happens at different times in different kingdoms. This means that, like all the other Kingdom events that you can see in Benefits page, Kingdoms will have their Lord of Lord event at different times.

Lord of Lord is an individual event, which means it has nothing to do with your alliance. Changing your alliance has no effect on Lord of Lords at all. But It’s a Kingdom event. So changing Kingdom when Lord of Lords is ongoing will hurt your progress as you will have a new and fresh lol in other kingdoms event if they are having it at that time!

Lord of Lord lasts for 9 days and has 6 phases. Each phase asks players to do a specific task to gain points and will give rewards to different ranks. At the end of the event, players will be ranked based on their total points and will get the event reward as well.

Unlike many other events, Lord of Lords doesn’t start/end in a server reset. All the event phases start and end in mid-day GMT.

The event has 7 different phases that each has its own main task and will give their own rewards for rankings:

The number of points different nodes give is as followed:

The Gathering speed for calculating Point/Time in the above table was a base 152.18%.

As you can see it’s better to gather Wood, Stone or Iron during this phase, for the most points per time.

Unlike the name, this phase is not just about constructing buildings. Researching new researches also give points! The general point you can get in this phase is 15 points per power point you get for buildings or researches. This means finishing a research that adds 1m to your power will add 15m points to your current Lord of Lord points. This phase is one of the most important phases for increasing points in lord of lords. However, you can construct buildings and perform researches in phase 6 of lord of lords as well and it will add to your points in the same way so a lot of players slack in this phase and keep their speedups for that phase.

Training soldiers is one of the main ways to make points in lord of lords especially for players who don’t have any buildings and researches left. The amount of points you can  make from different troop tiers is listed below:

As you can see in the table the best way to make points in this phase is by training T4 units. T4 units are very expensive in general and need a lot of gold and other resources to be trained so if that’s an issue for you, you can still make a lot of points cheaper with T3 troops.

One of the loved stages of lord of lords in some alliances is Rebel leader phase as alliances run competitions of who is killing most rebel leaders during this day! Even with that, however, this phase won’t add too much to your total points.

This table shows how many points you can earn from hitting different level rebel leaders: 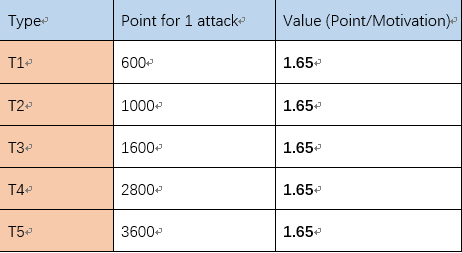 Please be aware that you only make points for attacking rebel leaders and not for defeating them, but since you’re using so much motivation and the lord of lords points aren’t that much, it’s still better to do the level or expeditions that your allies will also benefit from the most. Here is my guide about expeditions that you might find interesting!

This phase is an extension of phase 2 and usually the main determiner of who wins the whole event. During this phase, you get 15 points for each 1 power increase because or Construction, Researches, Equipment, Fortifications, Lord level upgrade, commander’s quality or level upgrades and VIP upgrade.

It’s generally a good idea to save your speed ups and Sept blessing items like “Crone blessing” for research to use them during lord of lords and in this phase of phase 2 of the event.

The last phase of Lord of Lords is Lord of war that lasts for 2 entire days. During lord of war, you earn points for wounding or killing troops in your kingdom.

Some kingdoms – even the ones who are usually at peace - consider Lord of Lords a free for all attack phase and let players attack each other freely for that duration. In general, it’s really hard to make a difference in results in this phase but the effect is not that low if you find some good targets to hit in your kingdom. 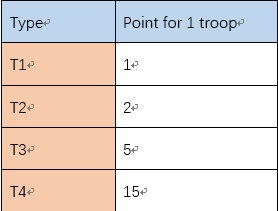 The event has 3 sorts of rewards. First is the quest rewards that you get during each phase for scoring a certain amount of points: 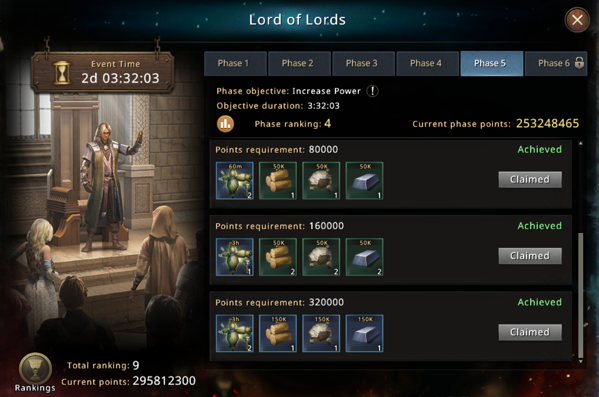 You can see these quests and point requirements on the main page of Lord of Lords event.

The second rewards are your rank reward for the current phase: 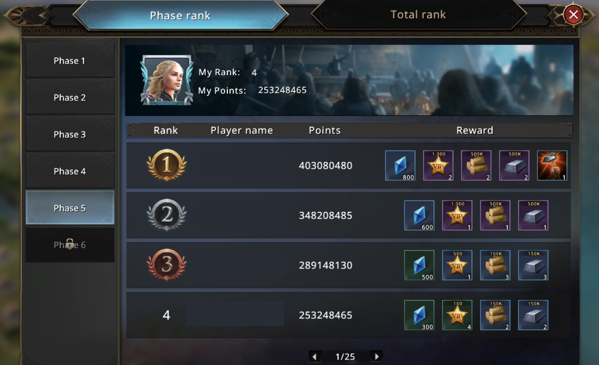 After each phase is finished the top 100 ranks of that phase will receive rewards based on their ranks.

The third and main reward for lord of lords happen after the last phase of the event based on the total points players scored during the event:

The main rewards of Lord of Lords event is the commander “Sabrina” medals and the castle exterior “Heart of the grass sea” coupons.

The details written for Sabrina are for her blue quality. At gold quality, she adds 20% construction and troop training speed and 25% research speed. Sabrina is a great commander in training grounds and against rebel leaders. This commander is only available in Lord of Lords and in another event which is only available for new players once. 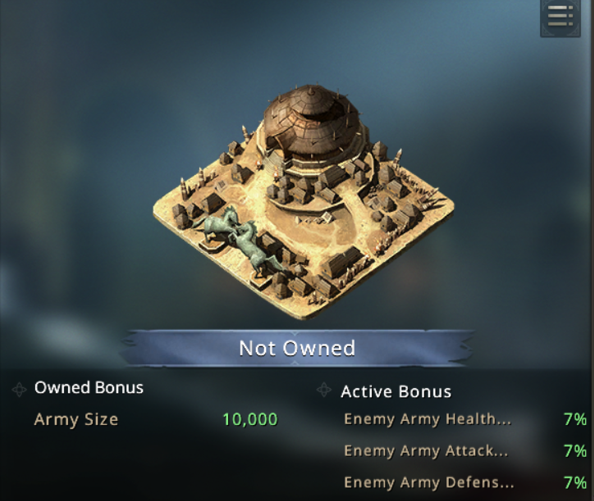