Oct 12, 2022
This guide is based on the author's personal experience and is only relevant to the current game’s content.

This short overview only covers the basics and it does not include all the information you get when starting the game and following Melisandres “orders”. It is meant for new players.

[1] Leveling up your Lord and the VIP level:

You get talent points when you level up your lord. Later on, there will be other ways to obtain a few more but that’s something for another guide. You might think “yay” so let’s do all the main story quests as fast as possible … don’t do that.
While you want to level up fast to setup your talents and get the advantages for that, you are wasting XP that way. The reasoning for this is the VIP level. You get an XP bonus depending on your VIP level. As soon as you hit VIP level 9 the bonus hits its max at 50%. 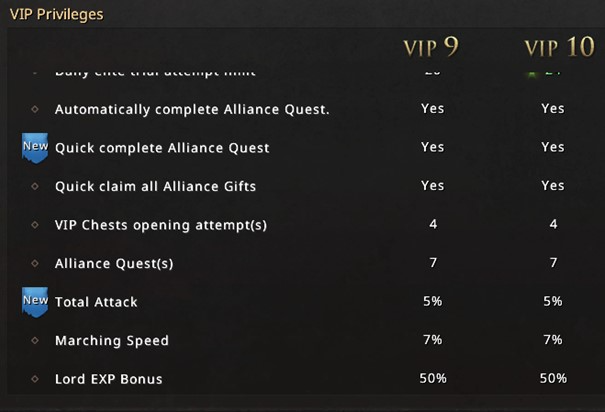 As you decide on when to turn in quests, you can keep most quests ready to turn in after reaching VIP level 9. You will need to turn in some quests to progress and build a big chunk of the resource producing buildings outside your castle. 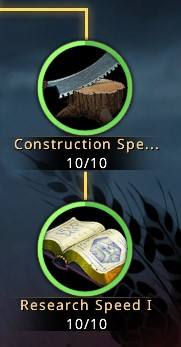 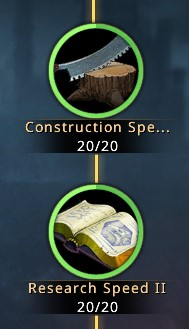 You can see your Lord Level in the upper left corner of the city screen for example. It is the white number in the blue shield.

In the beginning you should only focus on the Production Talents. Battle Talents are, at this stage of the game, a waste.
If you are not sure how many points you need to unlock the next talent row, just click on a locked talent and it will show you exactly what you need. In addition, if it is the next locked talent in line, you will have the option to click the “Unlock” button and you will automatically spend the talent points needed (if you have enough accumulated).

The Weirwood is a great way to level your commanders and get some XP. Here you will get most of your commanders from. Some you will get in normal, most only in the elite mode.
Especially in the beginning it makes sense to use the Guard Skills in the battles manually. You can get away with setting them on auto but sooner or later you will end up having to use them manually to progress further. The reason to use them manually is that many of them are area of effect skills and you can choose the targets way better than the AI. The AI centers the effect on the target it wants to hit, while you can usually fit more enemies in the area.
After clearing a level with a picture on it, you will earn stars, depending on the number of commanders you lose during the fight. If you lose none, you will earn three stars. You can return to any level you have already reached and try it again. With getting three stars on the level you unlock the ability to Blitz the level, which means you just get the rewards and use up the Stamina, instead of having to fight again. You can blitz one time or ten times at once. 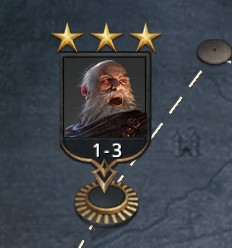 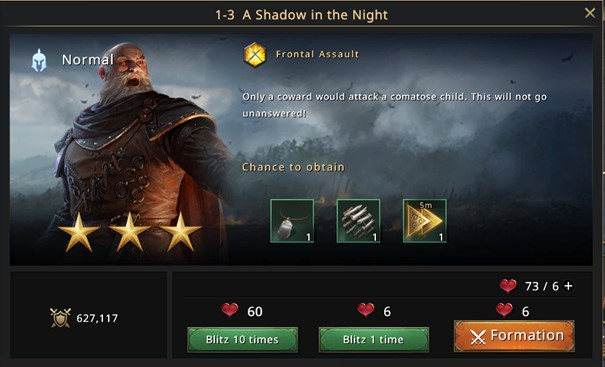 As your castle reaches level 4 you gain the ability to join or create an alliance. Being in alliance has quite a few advantages. First you can request help for constructions and research. Each help click you get will reduce the time to finish the construction/research by one percent or one minute, whichever is higher. The number of helps you can get depends on your castle level.
Second you can attack rebel leaders. Rebel leaders are one way to obtain your Lord Equipment. Killing a rebel leader will also give the alliance a chest. Every alliance member will get one so just claim them as soon as you can. If your alliance is active, you will need to clear the chests quite often. After 24 hours the chests vanish again … don’t wait too long.
Third being in an alliance allows you to attack rebel camps. Those camps will give you a chest you can trade at the Merchant Guild. The rewards are a nice addition, and you don’t need to have many troops to take part. To rally a rebel camp yourself, you should have decent attack stats. In a rally the stats from the rally leader count for the whole rally, which is the reason why you want to have a strong member of the alliance to be the leader.

There are usually four chat channels available. World, Alliance (if you are in an alliance) Topic and your language channel. The World and alliance channels will be most important for you in the beginning. In the Alliance channel you will get messages if someone gets attacked and if a rally is started.
You can use this channel to share rebel leaders you could not finish to your alliance too by clicking the share icon while on a rebel leader (same for castles and even empty slots on the map). The share button is right besides the star near the coordinates.

There are daily events, weekly events, monthly events, one time events … Events are a great way to get resource and speedup token. You should try to go for them. When you have access to the challenge quests, you can try to finish them too. In this case though you should try to get the normal and elite to have the same way to get points, for example by Technology Research. That way you can work on two or in the best case all three challenges at once.

Attacking Rebel Leaders and gathering resources on the map gives materials that can be forged into lord equipment at your Blacksmith. Lord Equipment gives you different bonuses, for example to research speed. Don’t neglect them!

While there is a way to produce resources in your city, you will have to gather resources too. The resource nodes are on the world map. You can send your army there to gather the resources. It is important to know that the higher the level of the resource node, the more resources are in it and the faster you can gather them. Do yourself a favor and don’t go for level four or five nodes before you have enough capacity to clear them out in one go. While it is faster than going for levels one to three … most people will not appreciate you blocking those nodes for an extended amount of time and maybe not even being able to take all the resources out of the node.
When a node is depleted, it will despawn and another node of the same level will reappear somewhere on the map.

When you first start playing the game, you spawn in the last added Kingdom. The Kingdom has a 60 day protection to allow players to get used to the game and grow in peace (depending on your Kingdom peace might be relative).
You can travel between Kingdoms by using transnational relocations, which you can get for alliance coins or by paying in Black Diamonds. Before you do that, you should take part in the one time events you will not have access to later on. Those events include the invasion of the Night King and the fight for Essos.
Switching Kingdoms resets your rank in the training grounds and some ongoing events that are active on your Kingdom. A warning will pop up, if there are such events active. You will also lose resources above your protected value. Resource Items are not affected and will stay in your inventory if you move.

Your best way to not get attacked is using a truce. The truce items will keep you from getting attacked and can be used if you are not in fervor. You get fervor by scouting great cities and other players or attacking them. Those actions break the truce too, so be careful.
While under a truce your Lord can not be taken, regardless if he is in your castle or outside with your gathering troops.
If you send your troops to collect resources while under a truce, they will not fight for the resource node. If an army of another player is in it, your troop will simply return home.
The truce items can be obtained through events, attacking rebel leaders, bought with Blue Diamonds or Alliance Coins (in the last case only the 8-hour truce).
Sometimes it is preferable to put all your troops and your Lord in shelter and not use a truce to save Blue Diamonds. You will need lots of them later on. In general, though you should keep your truce up at nearly all times.

As a new player try to do the following things (not in the same order as before in the article):
1. Join/create an Alliance as soon as possible
2. For your talents use the right side (Production Talents) to get Research and Construction speed I and II.
3. Instead of just turning all the story/main quests directly, try to get to VIP level 9 as fast as possible and then turn them in to get the 50% XP bonus.
4. From castle level 10 on you are a valid target to get attacked. From level 17 on your Lord can be killed (but will respawn afterwards again after refreshing the game). Keep your Lord in shelter or use a truce to keep him safe! To keep your troops safe, you have the same options.
5. Gather only nodes you can finish (or the smallest nodes you can find in your surroundings) and check the rules of your Kingdom. Higher level nodes contain more resources, and you get more resources per minute out of them than lower level nodes. There is usually fighting about higher level nodes, especially level 4 and 5 gold nodes so you might want to stay away from those, for now.
6. The Weirwood tree and rebel leaders are a good way to get XP for your commander.
7. Try to get Lord Equipment by killing rebel leaders and gathering resources. The equipment really helps a lot!
Share to：
< PREVIOUS