Yoozoo Games, a leading Chinese game developer and publisher, announced today that Game of Thrones Winter is Coming, a browser game officially licensed by Warner Bros. Interactive Entertainment under license from HBO®, is set to launch in spring 2019. HBO®, Warner Bros. Interactive Entertainment, and Yoozoo are all working together to create a game that allows players to be immersed in the world of Game of Thrones. 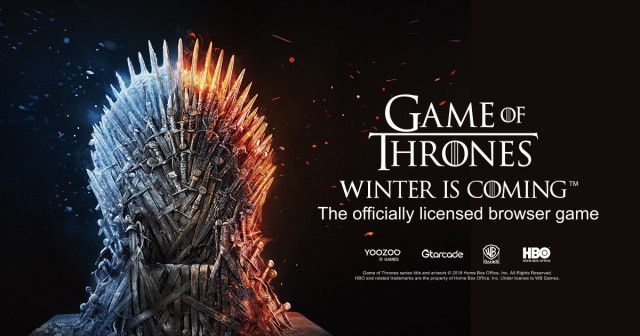 Developed by Yoozoo, the Game of Thrones Winter is Coming scenery, characters, and topography are all being designed by renowned artists, staying faithful to the look and feel of the critically-acclaimed, Emmy® Award-winning show. The story starts just after the death of Eddard Stark, where players take on the role of an ambitious Westeros lord, determined to save a people plagued by war and put a stop to the endless disputes between the Seven Kingdoms. Characters from Game of Thrones will appear across Westeros where the player will be able to recruit them to join their ranks.

Game of Thrones Winter is Coming has been designed to give players a balance of strategy and roleplaying where they can create a house, customize their castle, expand their territory, train an army， and progress through the history of Westeros. Players will also be able to team up with their friends and participate in player vs. player battles. 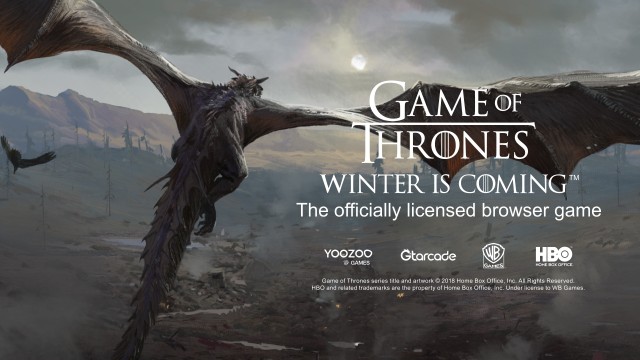 Game of Thrones Winter is Coming is set to launch in spring 2019.

Yoozoo signed up for strategic cooperation with Warner Bros. under license from HBO®, at ChinaJoy 2017, securing the rights to make a Game of Thrones mobile game. Gamescom 2018, Europe's biggest games conference, will mark the browser game’s first appearance.

“Game of Thrones Winter is Coming is the embodiment of our globalization strategy: we pursue the world’s top resources and partners, and keep high-quality standards for the development and publishing of games” Said Liu Wangqin, Vice President of YOOZOO and head of GTarcade at Gamescom 2018. “Yoozoo values the culture and reputation of Game of Thrones. Through in-depth research and industry-leading technology, we aim to bring fans of the series a game that will live up to their expectations.”

A global pre-registration event for Game of Thrones Winter is Coming is now open where players can get access to rewards upon release.

YOOZOO Games is a global entertainment company specializing in game development and distribution. The company is headquartered in Shanghai with offices in London, Berlin, Hong Kong, Singapore, and other major cities. Since its founding in 2009, YOOZOO has launched a multitude of highly successful products such as Legacy of Discord – Furious Wings and League of Angels, and has forged a strong global distribution network.

Warner Bros. Interactive Entertainment, a division of Warner Bros. Home Entertainment, Inc., is a premier worldwide publisher, developer, licensor and distributor of entertainment content for the interactive space across all platforms, including console, handheld, mobile and PC-based gaming for both internal and third party game titles.


HBO Licensing & Retail, a division of Home Box Office, Inc., partners with best-in-class licensees around the world to give HBO's global audience new and exciting ways to engage with their favorite shows. The division leverages iconic, award-winning HBO programs such as Game of Thrones, VEEP, Sex and the City, Silicon Valley, Insecure, The Sopranos, Big Little Lies, True Blood and more to create officially licensed consumer products, innovative merchandise programs, retail activations and live immersive experiences.  HBO Licensing & Retail works across a broad range of product categories, including collectibles, apparel, publishing, live branded experiences, digital gaming, fashion and beauty collaborations, luxury accessories, and beyond. Officially licensed HBO merchandise can be purchased in retail stores around the world, online in the US at http://store.hbo.com, and at the groundbreaking HBO retail hub, the HBO Shop®, located at 42nd and 6th Avenue in New York City.

About Game of Thrones:


Based on George R.R. Martin’s acclaimed book series, A Song Of Ice and Fire, the Emmy® Award-winning HBO series Game of Thrones follows kings and queens, knights and renegades, liars and noblemen who are engaged in a deadly cat-and-mouse game for control of the Seven Kingdoms of Westeros. The epic series’ storylines of treachery and nobility, family and honor, ambition and love, and death and survival have captured the imagination of fans globally and made it one of the most popular shows on television.