With awakening commanders learn new skills and can majorly affect the result of battle. These ultimate awakening skills have major influence on troop and commander damage or can cause major manipulations in report by changing your stats, healing your troops, or even summoning your dragon with the follow up skill faster. Nowadays, knowing these skills and how they effect in relationship with one another is key for designing a winning setup against your enemies. In this guide I will explain how these different skills can affect in relationship to one another, to boost each other or to counter enemy commanders.

This picture shows the current synergy and counters in-game between commander skills: 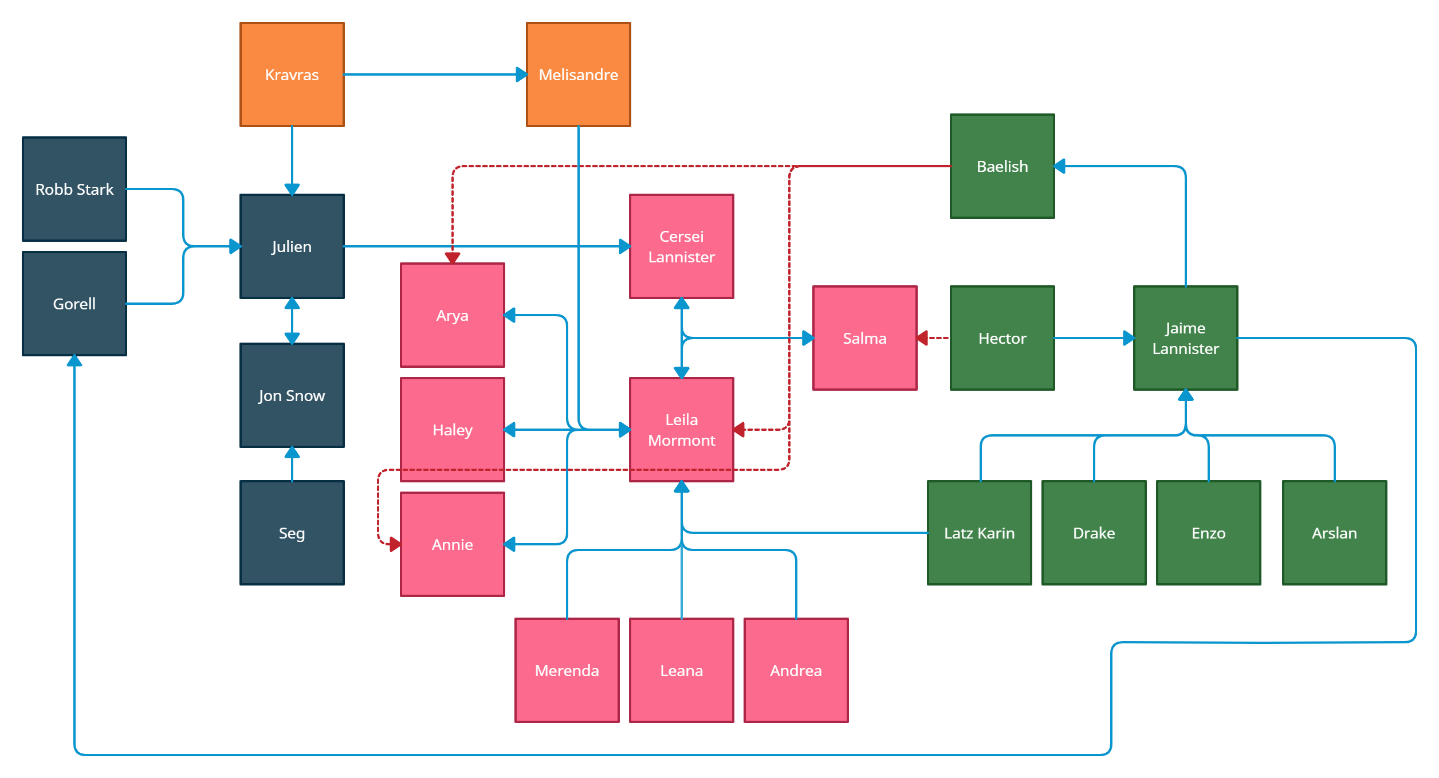 Commanders in dark blue are mainly for boosting troop attack or troop damage. Commanders in pink are for the Female setup, which is also known as the Commander Damage setup. Commanders in yellow are for bow base setups. And commanders in green are for Heal and Weakness setup. I will be explaining these setups and how they act in general against each other in later part of this guide.

A synergy relationship is shown with a blue line. A blue line from commander A to commander B means having commander A in your line up boosts commander B’s awakening skill.

A counter relationship is shown with a red line. A red line from commander A to commander B means if you have commander A and enemy has commander B, your commander A will be boosted or enemy commander B’s skill will be nerfed or will damage themselves instead of you.

Based on commander awakening skills and the goal of those skills, we can classify them to different groups. The basic way to group commanders currently based on the synergies and counters, is separating them to these 3 base setups:

The troop damage setup is mainly focused on increasing your troop damage output to enemy and will do it with active skills during the battle duration.

For example, Julien will increase the damage output directly and Jon snow will add crit damage to your troops. Meanwhile all commanders (with few exceptions like Soren), even the ones that I didn’t list in above table add to troop bonuses passively as well. Seg and Theon are two commanders that directly add to your bonuses during the fight. Robb stark and Melisandre also add to troop attack, while Kravras increases the amount of time your bows attack the enemy and by that increases the overall damage they deal. Gorell reduces the enemy frontline defense so he can technically increase your troop output damage on them in the same way as well.

The female or commander damage setup on the other hand is mainly focused on increasing the damage output that is caused by commanders’ active army skills. Commanders that are listed in that category have awakening skills which is conditioned by or is improving the commander’s active skill damage. Leila Mormont and Salma increase the number of times commanders can cast their skills in fight and other female commanders can benefit from this. Specially Annie and Arya have awakening skills which will directly damage the enemy after each time they cast their army skill, and Cersei Lannister whose skill can only happen after other commanders’ active skill.

The heal and weakness setup is more focused on increasing the sustainability of your troops. Healer commanders such as Latz Karin, Enzo, Drake, Arslan and Hector can return some of your wounded back to you during the fight. This healing can trigger Jaime Lannister special skill which will turn your troop attack to “Weakness attack”. When troops are dealing a weakness attack their damage can increase and they will never miss. Troops that are dealing a weakness attack will hit the lineup of enemy that received most damage so far. Commander Baelish can also use the weakness attacks to trigger his skill faster.

-Julien for Jon snow and Jon snow for Julien

Commander Julien increases the damage output and Jon snow can give your troops a critical attack. These two effects can boost each other out and cause a devastating hit on the enemy. Commander Julien is very slow in gaining his damage increase while Jon snow skill is only active at start of fight. 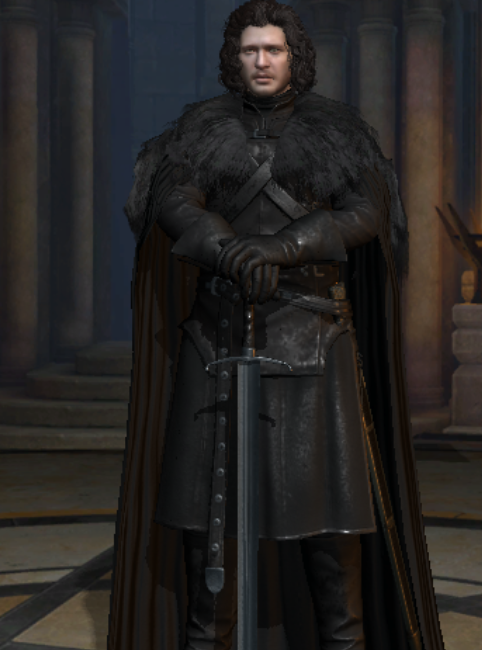 Commander seg increases your total bonuses at start of battle when Jon snow can add critical damage to your troops as well.

Robb stark skill adds cavalry attack for every time cavalry hits. Julien skill adds 2% damage output whenever a line up he belongs to attacks the enemy. Julien can use cavalry attacks for his bonus as well so both commanders get their skills boosted together. Similar to Robb stark, Gorell reduces 3% defense from the enemy with each spear attack on them and Julien can benefit from spear attacks as well.

Kravras increases the times your bow will hit the enemy so he can boost your Julien faster when you have bow in your lineup.

Kravras increases the amount of time your bow will attack, so having Margaery (Melisandre) that increases bow damage can boost his effect. 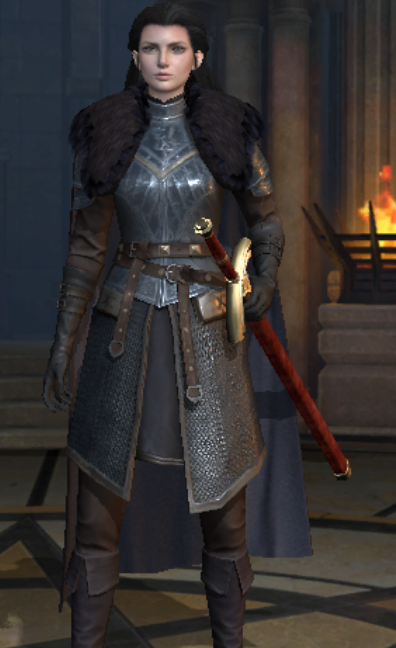 Leila Mormont and Salma both increase the amount of time your commanders cast their army skill. The more army skill casted, the more times Cersei Lannister wildfire skill can be casted. 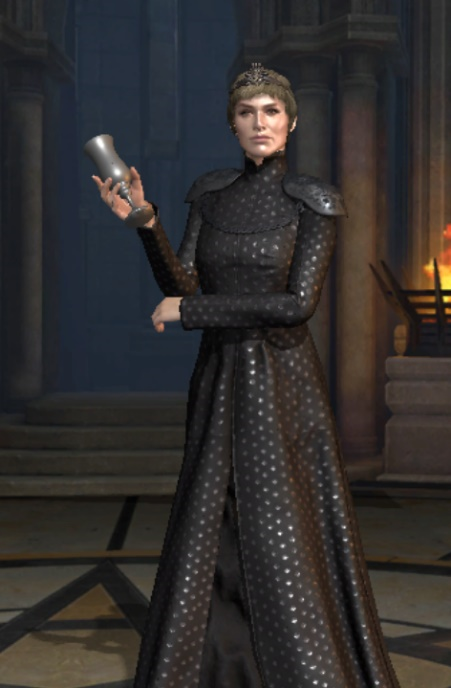 Salma allows your female commanders to cast their skills at start of fight in expense of silencing your troops (making them unable to hit for 5 seconds). This means to use commander Salma and benefit from her you have to maximize the synergy of her skill with other female commanders and to use her in a setup that is designed to deal a high commander damage.

This synergy is very obvious. Jaime’s skill to turn troop attack to weakness attack triggers when your troops are healed, so he needs to be alongside healer commanders such as Latz Karin, Enzo, Drake, Hector and Arslan. 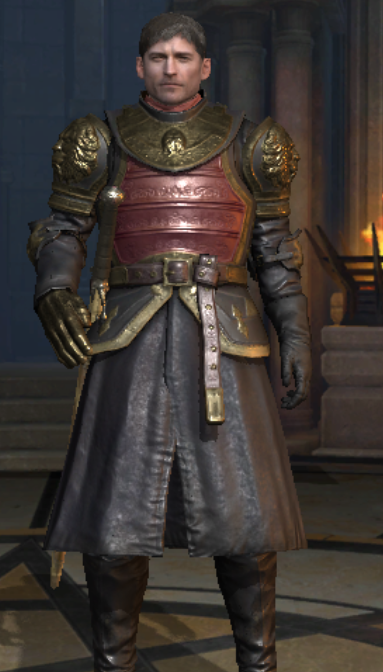 Petyr Baelish can cause enemy commanders to fall in disharmony and attack their own troops. This skill starts after second 25 of battle or when he sees 8 weakness attack launched on enemies by your troops. This means commander Jaime with a proper setup can accelerate Baelish skill and makes it happen sooner, which will increase the harm for enemy troops and reduces their damage on your troops for longer time in battle.

During battle, Gorell reduces different line ups defense repeatedly and can causes certain frontline lineups to receive more damage (based on the chosen targets of lineups). Commander Jaime can capitalize on that and lead all your troops to hit that weaker lineup with a weakness attack, which will deal a huge damage to enemy.

If you have Hector and enemy has Slama, then you’re Hector’s heal skill and his attack bonus will happen on first second of battle right after Salma leads the female commanders to deal damage to you then. This heal skill can trigger a weakness attack by Jaime Lannister right at the start of battle (Synergy of Hector and Jaime), and because of early weakness attack, Baelish skill will be accelerated as well (Synergy of Jaime and Baelish). This makes a Hector, Jaime, Baelish a great group against enemy Salma.

-Baelish for Annie and Arya

Annie and Arya have awakening skills that are directly linked to their army skill targets. Arya deals more damage to her target and Annie kills directly a percentage of her target (target of the commander damage/army skill). Baelish can cast disharmony and cause commanders to target their own allied troops with their army skills. This means Baelish can also redirect the awakening skills of Annie and Arya to their allied troops as well, causing even more damage to them. 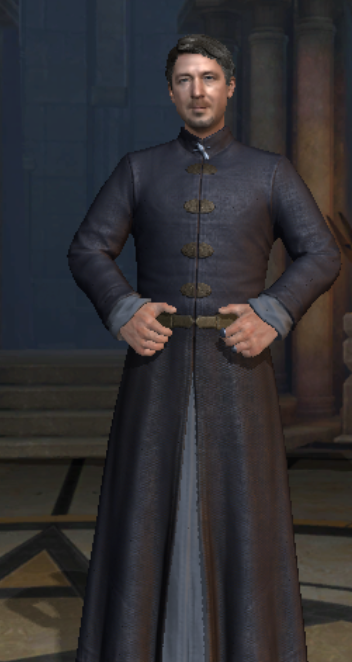 Even without considering the Annie and Arya skills that I mentioned above, Baelish is a direct counter to commander damage setup as he can turn the tables and cause enemy commanders to use this damage against their own army. This way, the damage on your troops will reduce and enemies’ strength turns to their weakness.

Commanders can do better together if they are used alongside commanders with similar skills and high synergy, and against commanders that they counter. It’s very important to know commanders’ strengths and weaknesses and plan your development and formations based on that.

Hope this guide was informative and explanatory. Have a nice day!

Thanks to Love Angel for contributing her guide on commander awakening synergy and counters. Please note that the guide is based on the player's own experience and will apply only to the current version. Please refer to the in-game rules for the latest information.