On Wednesday we talked about general rules for Alliance Conquest and people are thrilled about this event! Now we will reveal the detailed rules of this event so your alliance can make a better plan when the war comes. This IMPORTANT article might take quite a few minutes to read. If you have any questions, please leave it in the comments below.

Event Period: one month (the testing season being only two weeks). There will be two matches each week.

A single match consists of three phases: Registration Day, Match Day and Match Break. Take a look at the schedule for a match so that you won’t miss out.

-      The Leader and Officials in your alliance can register at the start of the season for your alliance during the Registration Phase that lasts 1 day. They will be able to choose the Match time on the Match Day (the next day) so that more alliance members can join and contribute.

-      Preparation Stage: You will learn the name of your opponent alliance and can check its basic information during this stage.

-      Entrance Stage: This stage starts 30 minutes prior to the match. Alliance members have to move to the battlefield map and be randomly assigned to either the Lannisters or the Targaryens. Once entered, you will NOT be able to leave the battlefield but Truce will be put on in your original city. If you quit the match to return to your city by force, you will NOT be able to rejoin anymore.

-      Match Stage: A single match lasts for 1 hour, and the alliance has the option to choose when to start the match.

-      An alliance will get a bye when they don’t have an opponent and be considered winning the match and receive season points.

-      Match Break follows the end of a Match Day, during which you will be able to join or quit a qualified alliance or move to another server again.

-      Final results will be calculated at the end of the season, and the current season ends.

After all the preparation, all you need to do is to put your commanders, troops and dragons in position in the new battlefield, and ready to face off!

-      Buffs: All commanders and your dragon will accompany you to the battlefield and the buffs they bring will be locked upon entering. Any buffs gained after you enter the battlefield will not be counted.

-      Truce: Truce will be automatically put on for your original city after you enter the battlefield. if you have a Truce on already, the countdown will be stopped during the battle and resume when the battle is over.

-      After entering the battlefield and being assigned to one of the houses, you will need to arrange the location of your castle in the initial spawning area.

-      You can send up to 30 reinforcement regiments (including the occupier) to help defend a location. As the rally initiator, the player occupying the location can deploy commanders, while other players can only send in troops and dragons.

-      A maximum of 3,000,000 troops can join a single battle, and the rest of the troops will be put on standby. All reinforcement regiments are ranked based on their Power. Regiments with higher Power will join the battle first until reaching the max troop limit (if adding a regiment will exceed the limit, that regiment will not be added).

-     Only the occupier’s Lord Talents will take effect, and their commander bonuses are only activated when deployed in battle.

-     Rally leader's current buffs from research, gear, talents and commanders will be kept in the building which is taken by the alliance. Even the rally leader leaves it, the buffs will still be effective in this building as long as their alliance holds it. Each lord can only initiate ONE rally against buildings until the building occupied before is lost.

-      A defeated reinforcement regiment will return to their owner’s city.

-      The attacking troops will not immediately enter a location building after successfully capturing it. They will return first to their owner’s city. The location will be protected for a short period and the occupying side can send defense regiments to the building during this time.

-      The Protection Phase will not be activated if the current occupier leaves a location so that another player can occupy it.

-      The Protection Phase will not be activated when an enemy NPC captures a location. Instead, it will return to neutral status and be open for capture from both sides.

-      The Player's marching speed will be increased during the match. And they can initiate multiple rallies against a single target.

-     Capturing enemy main camp in the match cannot capture enemy Lord or get any resources.

-      Location on the battlefield does not have any defense fortifications.

-      Will only be available during a single match. You will NOT lose any troops during a match. All wounded troops will be sent to the Combat Hospital instead. The Combat Hospital has NO HEALING LIMITES, heals faster than normal hospitals and has no resource cost.

-      You can use healing boosts both from your own and those bought by the Alliance Leader in the Battle Shop with Alliance Tokens. Those from the Battle Shop will be used first. Your own boosts will not be returned after the match ends once used.

-      Your troops back on their original server are not affected by anything that happens in this mode.

-      The Battle Shop will only be available during a single match.

Alliance leaders can buy necessary items with Alliance Tokens for all alliance members to claim.

-      The Alliance Tokens that can be used in a single match is LIMITED.

-      All items from the Battle Shop will be REMOVED after the match is over.

8.    Cans and Cannots during the Alliance Conquest:

-      On the Match Day, players CAN NO LONGER join or quit the qualified alliances until the end of the Match Stage. The alliance leader can no longer dismiss the alliance.  Alliance members will NOT be able to relocate to another kingdom.

-      You CAN enter their inner-city interface and perform related functions during a match.

-      Eliminating enemy troops or healing allied troops during the match DO NOT count for other events.

How you gain points will determine the final winner. Check out the ways you can obtain points and triumph over your enemies!

Occupying a location on the map, or capturing one for the first time, will grant battle points. 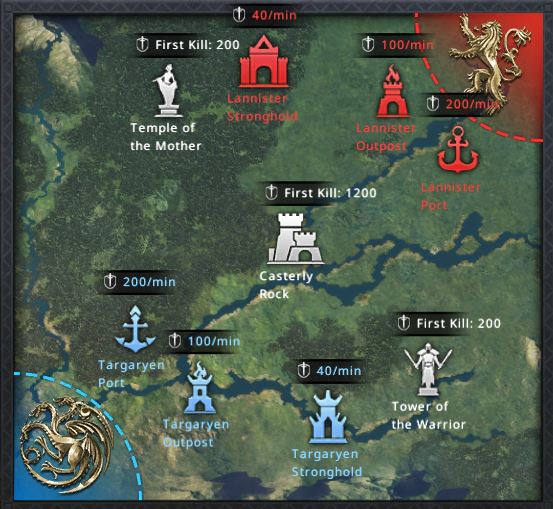 The very first capture or continuous occupation of these locations will grant the occupier battle points. Different locations have different functions and point rewards. Check out the table below. 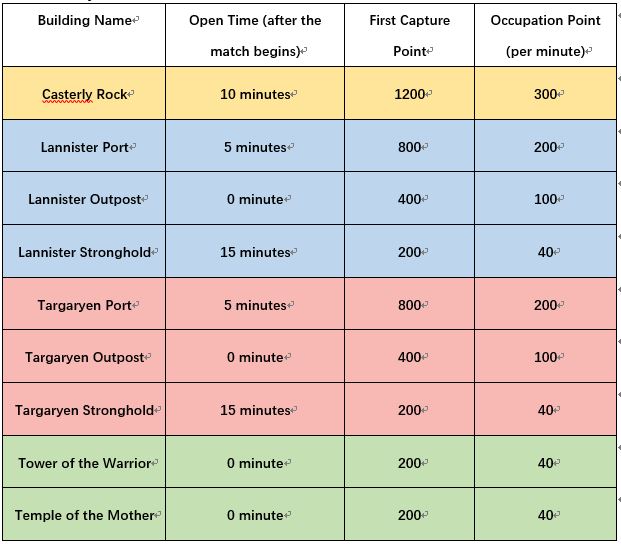 -      Lannister/Targaryen Stronghold: can be attacked 15 minutes after the battle begins. A Lannister/Targaryen reinforcement regiment (considered as NPC) will join the battle from this location every 3 minutes. This regiment will automatically attack the locations occupied by the enemy. Its size is based on the occupant’s highest rally size, and the troops are based on the occupant’s highest unlocked troop tier.

-      Tower of the Mother: can be attacked when the battle begins. Occupying this location will grant a healing speed bonus to all allies.

-      Tower of the Warrior: can be attacked when the battle begins. Occupying this location will grant all allies Army Attack, Army Defense and Army Health bonuses.

Take some time to study these rules as they can be quite complicated. But once you figure out a plan tailored by these rules, you will be one more step closer to the ultimate crown throughout the whole land of Westeros!

*Note: Final rules are subject to change in later seasons.