Eight Great Cities in Game of Throne Winter is Coming

The Seven Kingdoms contain many well-known Castles. They represent the honor, power and wealth of the great houses. The Alliance that occupies and rules a Castle gains the support of its subjects as well as the bonuses and buffs the Castle provides. 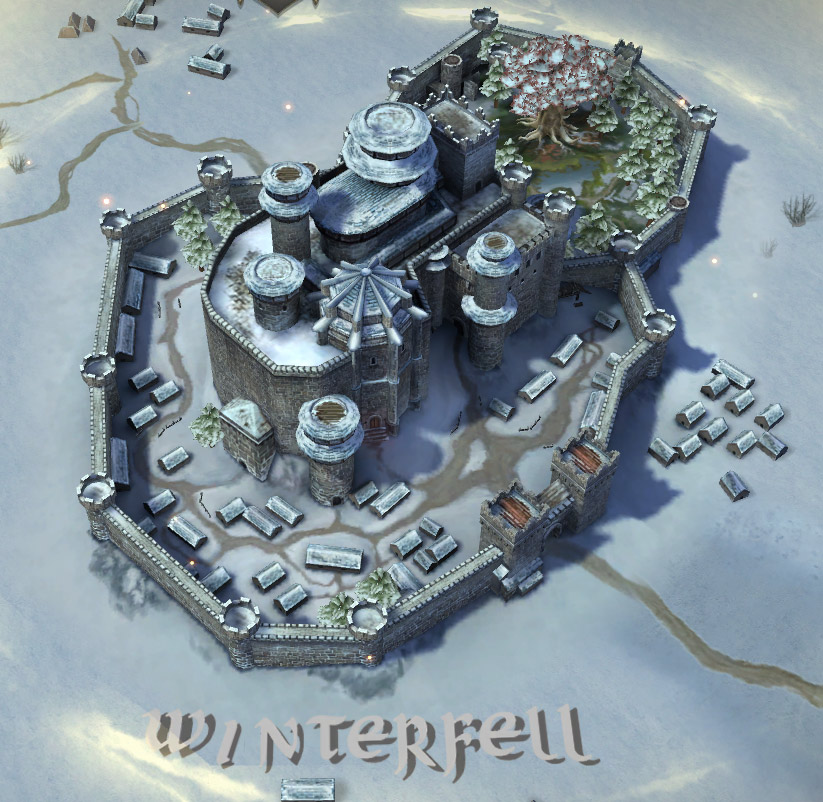 The Long Night may have ended and the Wall have rose from the ground, but Brandon the Builder did not stop there.

With the terror of the Long Night still fresh in his mind, Brandon knew that it will be back one day. When that happens, the people would have already forgotten about the nightmare.

Heroes who fought against the evil could no longer return. This sad truth urged Brandon to take root in this freezing Northland. He wanted his descendants to keep an eye on their enemy who is asleep in the Lands of Always Winter.

This is how the castle in The North came about. House Stark from the line of the Builder have been ruling this land ever since. Although the Builder's story has faded from the people's minds, and the Andals have succumbed to Blood and Fire, House Stark continued to watch over The North.

Because they firmly believe that winter is coming. 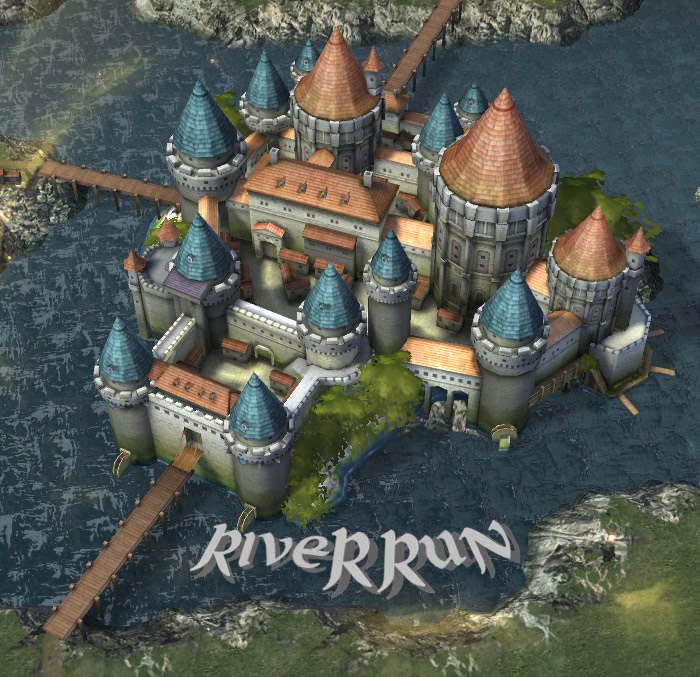 What lies behind House Tully's popularity among their bannermen and their proclamation of ""family, responsibility and honor"" throughout Riverlands, is their reliance on the strong castle Riverrun.

The Andals came from The Vale a thousand years ago. They fought with the First Men and built the Seven Kingdoms. That was when the Tullys laid the first stone of Riverrun at the junction of Tumblestone and Red Fork. Today, the castle still stands after the Tullys have ruled the Riverlands for 300 years.

Riverrun may not be as spectacular as other castles in Riverlands - even the destroyed Harrenhal is ten times larger - but it remains a strategic location in times of war. Countless kings great and small have sought House Tully's support. No war has ever fell Riverrun. 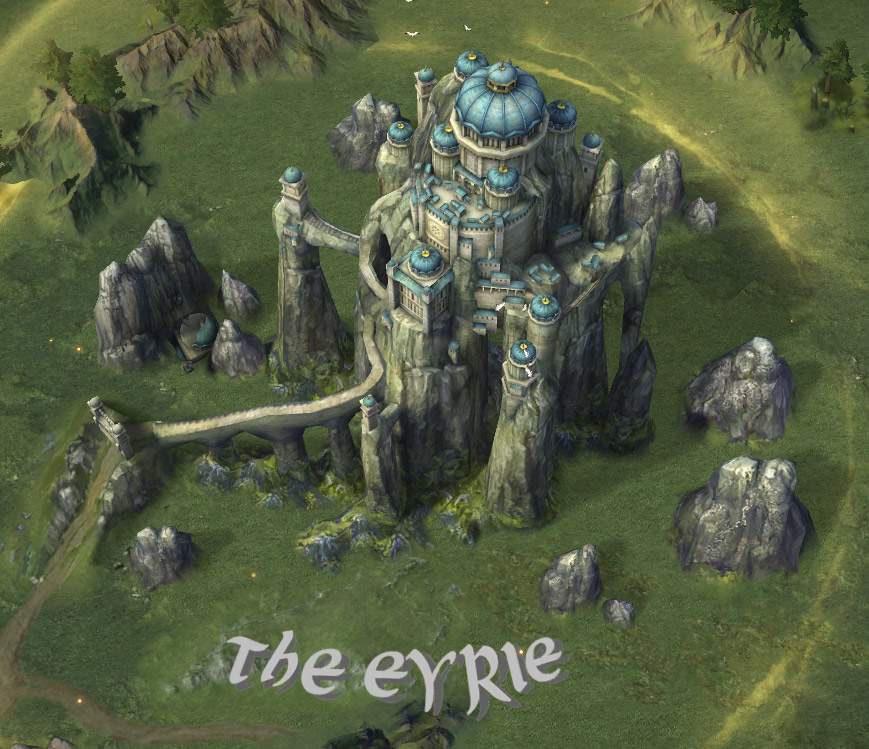 The Eyrie, a name spoken with pride among the Knights of The Vale, and one that greatly troubles its enemies. It is known as the impregnable castle. Thousands of years ago, House Arryn, one of the oldest lines of Andal, constructed the Eyrie over generations. The treacherous cliffs of Mountains of the Moon has protected the castle and its people. Even after a thousand years, the Eyrie remained unchanged. It was a few decades ago that Lord Jon Arryn resisted Aerys the Mad King - an event which marked the beginning of a new era for the Seven Kingdoms. 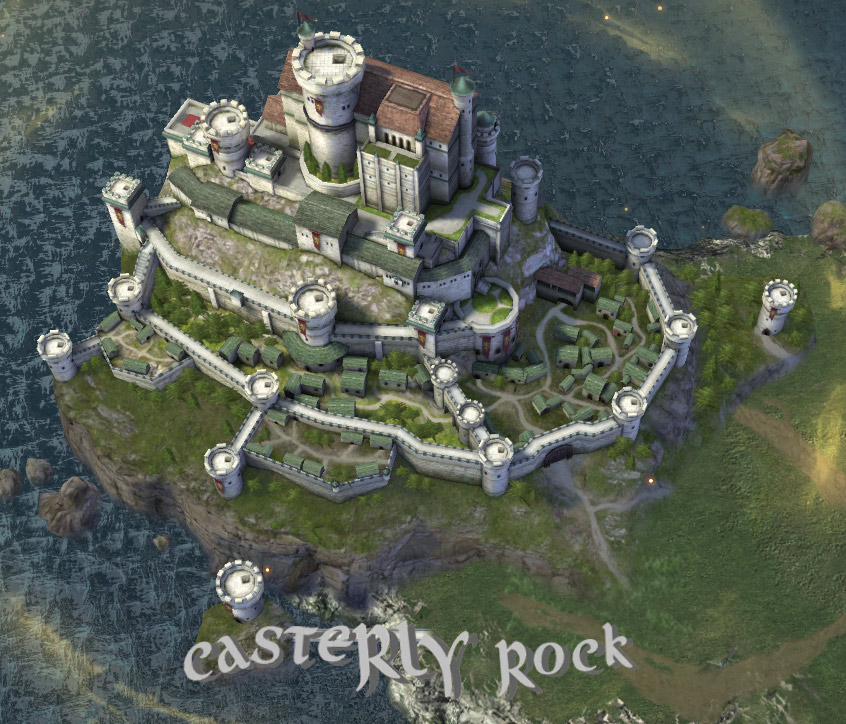 No one would have imagined that all the splendor began with a ""fraud"". After Lann the Clever took the castle from House Casterly, the Lannisters appeared in history and went on to rule for centuries. Since then, the words wealth, gigantic and prosperity, became associated with Casterly Rock.

During the times of the First Men, House Casterly found gold inside this rock hill and decided to take up residence there. As they dig deeper for gold, they carved halls and tunnels until it transformed into a castle. House Lannister, descendant of Lann, further developed it into the biggest, wealthiest and best-equipped castle of the Seven Kingdoms. By then, Casterly Rock and the Lannisters are well-known throughout the realm, even across the Narrow Sea. Hear Me Roar! 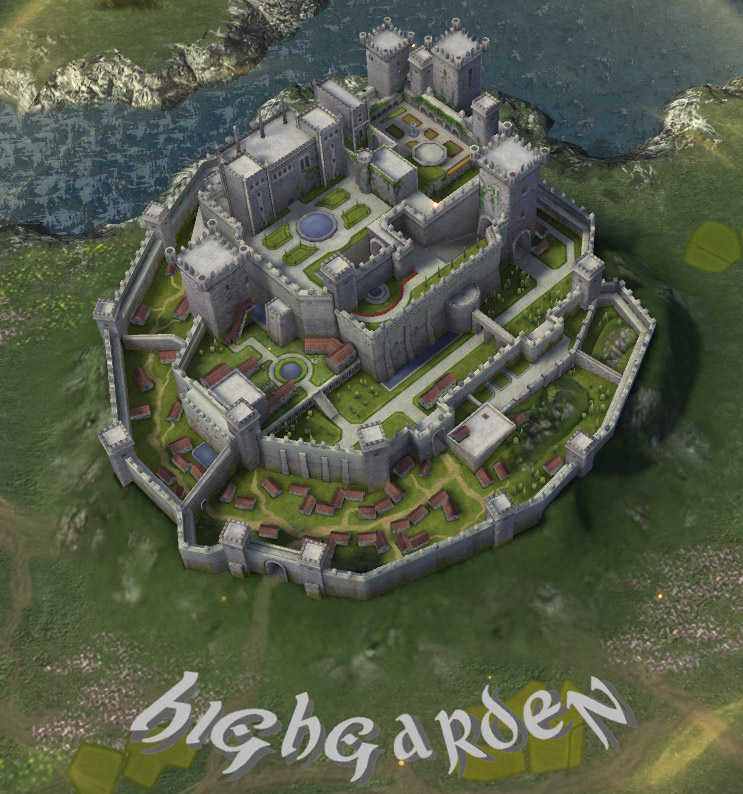 His son Garth Gardener lived in the warmest place in Westeros - the Mander, where he built a castle and tilled the land. The castle later became known as Highgarden and stood for a thousand years.

After House Gardener was taken over by House Tyrell, this blessed land became even more prosperous. Fertile land and colorful flowers lined the Ocean Road. Ripen fruits hang on every tree and the sweet scent of golden roses filled the air.

This is Highgarden, the land of richness and prosperity. 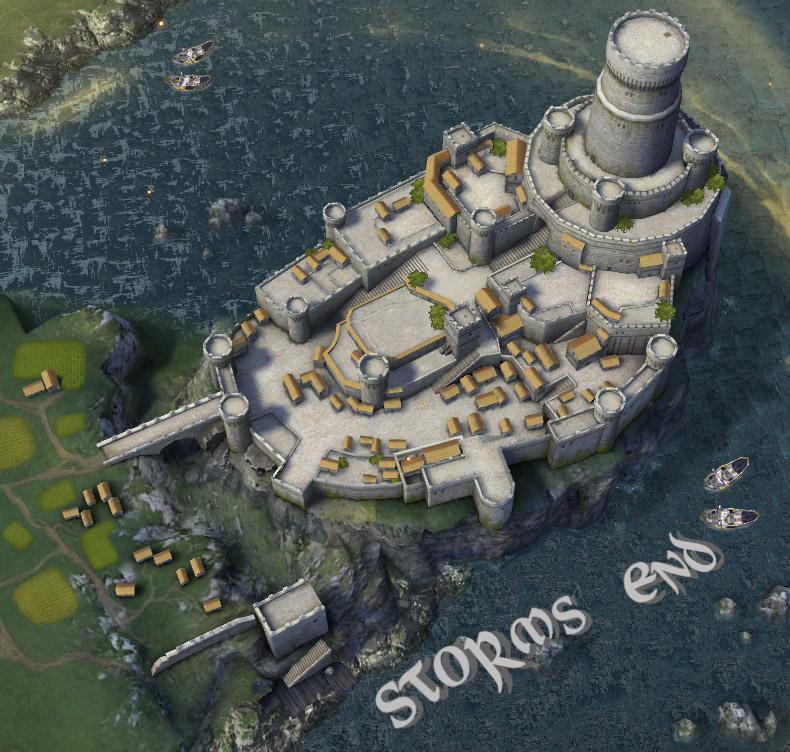 Durran built castles one after another after each one is destroyed, until the seventh castle, Storm's End.

Storm's End became the symbol of an indestructible castle. Neither storms nor wars could shake this castle at Durran's Point. It went through the War of Conquest, the War of the Usurper and countless other warfare, but it has never fell or been destroyed.

Regardless of the legend's truth, Storm's End is no doubt an exceptionally strong castle surrounded by a wall of a hundred feet high. The stones of the wall are so perfectly placed that no wind can find its way through.

A thousand years has passed, yet Storm's End continued to stand tall in the midst of storms and wars. 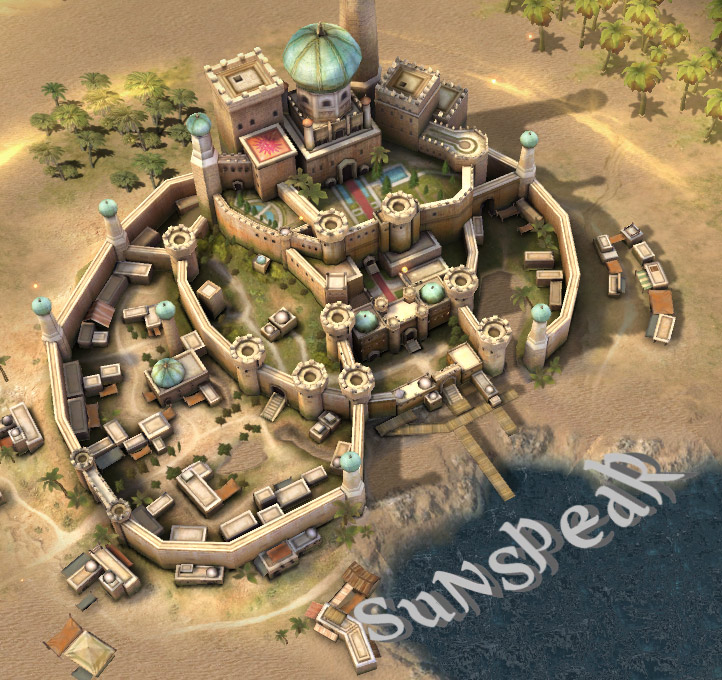 House Martell is a famous story of how a small house rose to fame.

This great ruler of Dorne had a humble beginning. Its history a legend like no other.

Once upon a time, Sunspear used to be a lesser-known castle at the north of Greenblood. Their reputation and scale were the same as House Martell at that time - fameless and powerless.

It was only a matter of time before House Martell is wiped from history. But their fate took a turn when the Rhoynar arrived. No other union by marriage had such a powerful impact on a land. We will never know what House Martell thought of the Rhoynar and their leader Nymeria, but the result of their union is plain to see.

Today, House Martell has ruled Dorne for over 700 years. Its capital Sunspear sits proudly, protected by three Winding Walls and narrow alleys. Two tall towers, Spear Tower and Tower of the Sun, form the landmark of Dorne. Even the ugly Sandship from before has become part of Sunspear. 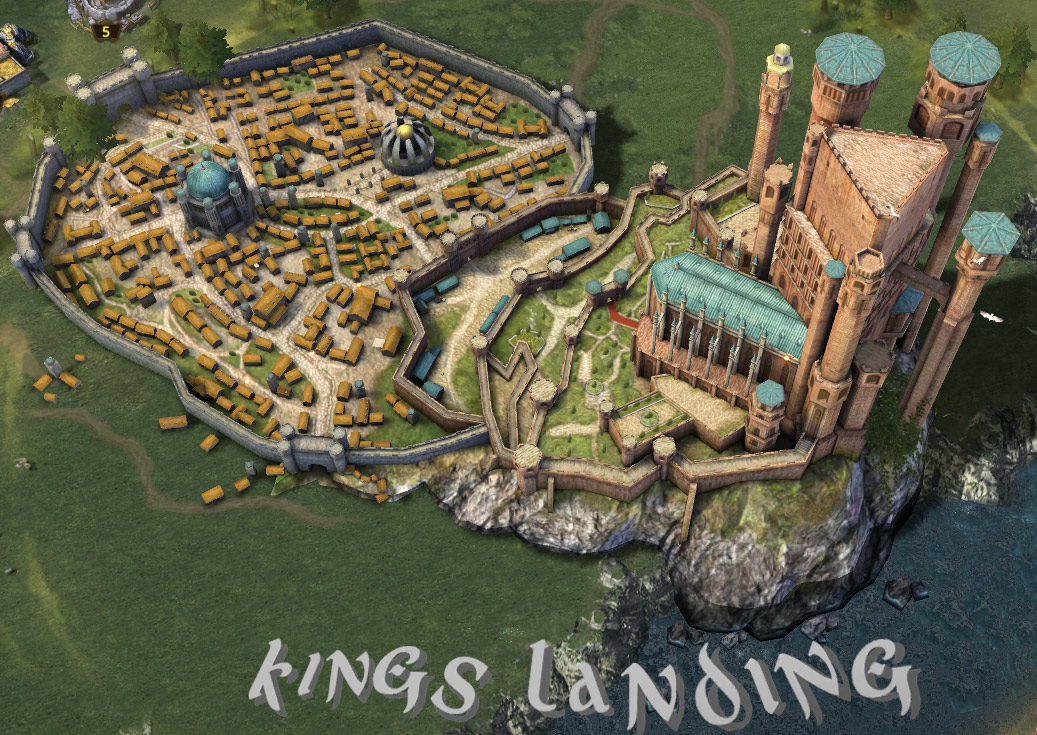 The King can gain total Attack, Defense and Health +15%

Meanwhile, King has right to give buffs to his alliance members and give debuffs to his enemies.

Three hundred years ago, fishing villages and swamps lined the Blackwater River. Everything changed with the arrival of Aegon Targaryen. Soil and wood were used to restore his fortress as he embarked on the road to conquer.

Today, the fortress on the swamp has become the greatest city among the Seven Kingdoms. Although the city has seen many rulers and been through countless seasons, all these contributed to its current glory. Gold Cloaks are keeping the streets safe while fishermen run their business at the pier. Colorful lights on the Street of Silk concealed the sorrowful air at Flea Bottom.

This is King's Landing, the capital of the Seven Kingdoms, a place of honor and blood. Who will be the next to sit on the Iron Throne?