Team up with Your Friends to Seek Treasure throughout Westeros!

Hidden treasures are waiting to be discovered throughout Westeros.

From June 14th to June 16th, the first Treasure Seeker event will be available in-game, where you can team up with your friends to seek the long lost treasure or plunder a treasure site occupied by other players. Dragon dyes, dragon essences, badges, and other surprising fortunes are up for anyone's grab! Check below to find out more about the treasures.

Requirement: Players with Castle level 17 or above

Create Your Formation and Team up with Your Friends

Team up with your friends to search for treasures on Westeros! One team consists of 3 players from the SAME KINGDOM. You must create a formation for deployment after joining a team. Only the team leaders can start searching or plundering treasure sites when the team is full and ready, and only their Commander and Army bonuses are applied in battle. The second player joining in the team will automatically become the leader when the original team leader leaves.

One Search/Plunder will deduct 1 attempt from each member. Members cannot quit during the period, neither can you transfer to another kingdom. You can modify the formation after your army has returned.

Search for Treasures Sites, Plunder and Defend Them

After successfully setting up the team, you can search for treasure sites scattered on the map and possibly encounter opponents from different kingdoms. The higher the treasure site level is, the better the rewards it yields.

Once occupying a treasure site, you have to defend it until the end to claim the rewards, as the opponent team will plunder/hold the treasure site once you fail to defend. The occupying army details are hidden, only general information is available.

There are certain Search attempts and Plunder attempts FOR FREE every day, and attempts will be reset daily. The additional attempts you purchase won’t expire and can be used in the next round.

Your TROOPS MAY GET WOUNDED OR DIE when defending or plundering treasure sites. Be sure to make a wise choice!

Open Chests and Claim Your Rewards

Three chests will be available for the winners’ team after successfully defending/plundering and occupying the treasure site. Click one of the chests to claim the rewards, which including the Marching Animation Dancing flowers, Badge Chests, dragon dyes, Shadow Essences, Diamonds, and many other items! Each chest contains different rewards randomly, let’s see who will be obtaining the best rewards of the team. Best of luck! 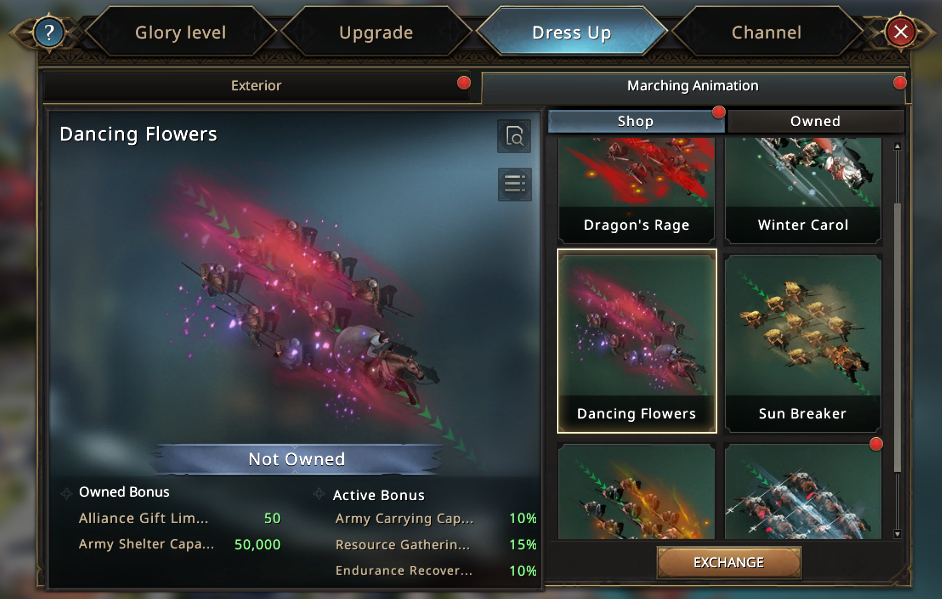 Call on your friends and get ready to seek for the rare treasures throughout Westeros!